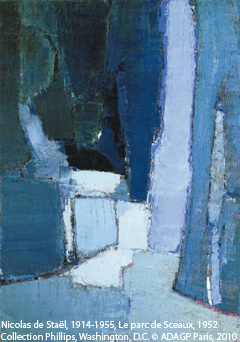 Over the past ten years or so a few major studies (seminars, publications) have dealt with musical life under the Vichy regime (La Vie musicale sous Vichy, edited by Myriam Chimènes, Paris, Complexe, 2001). Similarly, there has been some research into French musical creation in the mid fifties – Jésus Aguila’s thesis Le Domaine musical: Pierre Boulez et vingt ans de création contemporaine (Paris, Fayard, 1992) is one of the principal milestones. Now that these two areas of investigation have been put on the map, it is the history of musical life in the immediate post-war period that remains to be written.

The seminar ‘Horizons of music in France 1944-1954’ is framed by the publication, in 1944, of Olivier Messiaen’s Technique de mon langage musical and the first performances, in January 1954, of the Concerts du Petit-Marigny (to become the concerts of the Domaine Musical the following season).

This seminar will therefore focus on studying certain problems apparent in the musical landscape that emerged after the Liberation. What are the relationships between official modernity (the Groupe des Six in the interwar period, the Groupe Jeune France), and the new generations of composers, brought up in the teachings of Messiaen and Leibowitz? Also, both at the official institutions and in private tuition, what are the methods of teaching composition, and how are they received by the pupils?

What are, for post-war musicians, the venues for concerts and other forms of musical expression (concert societies, incidental and film music)? What are the new grammars of composition? On the fringes of the official musical world, which personalities, for the new creative artistes, contributed to this awareness of being a group apart?

These are some of the issues that will enable a better understanding of a crucial period in modern musical history, one that saw the laying of the æsthetic and intellectual foundations upon which our era still in part lives today.

The panorama of music teaching at the Liberation was shared between the official structures and private tuition. The latter, on the sidelines yet assiduously cultivated, completed the teaching received at the Paris Conservatory, calls it into question, and reveals, at times, its incompleteness. Messiaen himself is a case in point, with his harmony class at the Conservatory and those, less official, for composition and analysis.

The diffusion and performance of new music in 1945

Some media for diffusing music, like the radio, were encouraged though at the same time censored by the Collaboration; others were completely shut down. The Liberation led to much discussion of music and particularly the new works that were then being revealed. The emergence of these mostly unknown scores also demanded a reconsideration of current performance techniques.

14h45: Radio, music and modernity in the wake of World War II
Karine The Bail

16h: Performance conditions for contemporary music in Paris between 1945 and the birth of the Domaine musical
Jésus Aguila

The singular post-war landscape of music

The war years put paid to the supremacy of the Groupe des Six in the French musical landscape (Francis Poulenc was programmed at most of the Concerts de la Pléiade). However, the period of the Occupation also saw the appointment of Olivier Messiaen as harmony teacher at the Conservatory, dispensing classes that after only a few seasons saw the blossoming of a generation that no longer wanted to have anything to do with the language of the immediate past.

10h45: Pierre, André, Boris and the others…
Robert Piencikowski

11h45: Through the eyes of a witness:
Michel Fano

14h30: Approaches to the invention of musique concrète
Marc Battier

Writing for images and for the stage

On the borderline between composer and arranger, rare were the young composers of the post-war period who did not write for the stage. The effervescence of theatre companies at the Liberation enabled already established composers (André Jolivet…) and those on the threshold of their careers (Pierre Boulez, Maurice Jarre…) to practice a multi-facetted craft.

16h15: The cinema as a laboratory for sound and music
Philippe Langlois