The Cdmc holds a unique collection representing all aesthetics within musical creation.  This collection has grown thanks to the collaboration of composers, publishers and Radio France. With a consultation area open to the public, the centre also affords access to many online resources through the Catalogue and the Gateway to Contemporary Music. A beacon of the latest music news with its website, the Cdmc organises encounters with the movers and shakers of contemporary music. 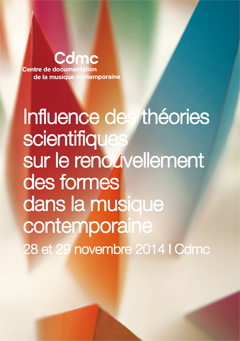 Musicological enquiry into musical form has often been kept within the framework of a ‘mechanistic’ description or else one under the influence of Gestalttheorie (according to André Souris.) From the 1970s, those who truly tried to escape from the rigid, traditional and ‘mechanistic’ framework of formal conceptions, were the composers themselves. It was Xenakis and Ligeti who gave the initial impulse, while members of the following generation studied scientific works (on fractal geometry, catastrophe, chaos theory, the systems of Lindenmayer, astro-physics, semio-narrative structures, mathematical models, etc.).

In the course of these day sessions the attempt will be made to establish dialogues between composers, scientists and musicologists with the aim of learning more about the approach taken by creative artistes and to see the way in which they have been influenced by the study of scientific works. Did the reading of books by René Thom, Jean Petitot, Henri Atlan and other scientists provide merely metaphors for composition, or did the expansion of knowledge enable composers to develop a formal/structural system derived from the scientific models themselves?