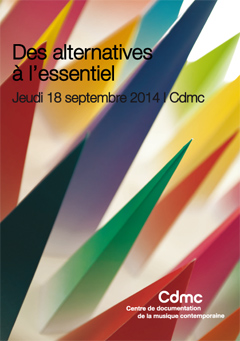 The essential will here be considered as a subject touching style, tradition, cultural contexts. Almost an historical phenomenon, a definite something also manifests itself in experience, at times inexplicable – or explicable only up to a point: what would be essential for oneself, not as a certainty or fact, but as a demand one can make upon oneself so that others acknowledge it.

In February 2013 in Rome, at the Villa Medici, during the first part of this seminar, the Colombian composer Juan Pablo Carreño asked this question about the essential, focussing on its universal implications from an extra-European point of view. He also examined the question of the modernity of his own generation. Examining this question in Paris, where the essential has clearly another meaning, will be more complex.

This second part, prepared with the musicologist Nicolas Munck, will look to the future of creation, fresh alternatives to the essential and its triggering elements, and, in connection with the idea of the essential, will attempt to confront young creative artistes with a generation of composers that has taken on board new approaches to music, such as are fundamental in the recent history of music.